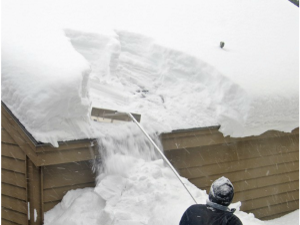 Several areas of the US are currently experiencing heavy and frequent snowfalls. From Criterium Engineers corporate office in Portland, Maine, we would like to remind owners, investors and managers of industrial, commercial and multifamily residential buildings that while you are concentrating on removing snow from around the property, attention must also be paid to the roof. The added weight, called load, that snow places on a roof brings the potential for collapse or other safety concerns.

Building codes define how much snow load a building is capable of supporting.  These defined loads vary by geographic region. Loads range from 10 pounds per square foot (PSF) in mild winter climates, to 60 PSF in average winter climates, to 400 PSF in climates with very high anticipated snowfalls.  The weight of snow also changes with each storm as light snow may have low moisture content and dense snow can weigh nearly as much as water. The weight of snow on a roof can be compounded by multiple storms and by the thawing and freezing that happens beneath the snow covered roof.

The risks to a roof may depend on whether it is a flat or a sloped roof. A flat roof may be subject to structural distortion and may even collapse due to heavy snow loads.  Distortion may create areas for snow and/or water to pond, increasing the load in that specific area. The ponding can create leaks as joints are stressed and fail or even collapse.

Generally, a sloped roof will not have the load problems of a flat roof, although collapses can still occur.  More commonly, problems on a sloped roof include leaks (and damage caused by leaks) as well as harm to vehicles and pedestrians from falling snow and ice.

The structure of a roof may also contribute to or minimize snow load problems.  A flat roof with low parapets and little surrounding it may shed snow from blowing wind.  Conversely, wind may cause the snow to be concentrated in certain areas such as walls or roof valleys. In these areas of concentration the snow weight exceeds the design load for the structure.  Sloped or flat, roof drains and equipment may also be blocked by accumulating snow rendering them non-functional.Maintenance must pay attention to those roof features.

What does the building owner and manager need to know and do?

There are several reasons owners and managers need to address the risk potential and take steps to avoid snow load problems.

Criterium Engineers has seen first had, code violations, differences in designed plans to built plans, damages on pre-manufactured components and building upgrades that ALL change the snow load and provide potential for collapse.

The first step in preventing problems related to snow accumulation is conducting a simple audit.  Confirm that the roof was designed and built to current codes, is free of defects and has been properly maintained.

The second step is to have an operations and maintenance snow load plan. The first component of a good snow load plan involves monitoring. Maintenance staff should watch the weather, take measurements of snow accumulation and monitor roof distortion.

The second component of a snow load plan involves snow removal.  When accumulation reaches the point where it represents a hazard, roof snow needs to be removed. That may not be as easy as it sounds.  Placing personnel and equipment on the roof may put the roof beyond its carrying capacity endangering those involved. Removal techniques may also damage the roof’s surface creating new problems.

According to the calendar, there are at least 5 more weeks of winter ahead. Building owners, investors and managers need to take a proactive approach to snow loads in order to prevent building damage and ensure tenant safety.

Call us if you need help with your roof audit.