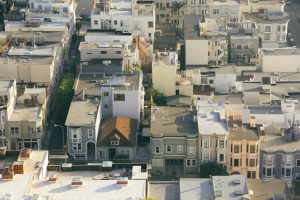 Some board members may think deciding about a new roof surface is over their heads (forgive the pun). Condominium board members and property managers of urban mid and high-rise buildings often face flat roof maintenance issues and now a new wrinkle in the roofing decision process has arisen: black or white.

In the recent past most flat roofs were made with a rubber-like elastomeric membrane called EPDM. Though black EPDM still accounts for the majority of flat membrane roofs for condo, commercial, and industrial buildings in the northern states, you will see things are changing just by looking out an airplane window as you approach a major airport to see the roof landscape below turning white.

“Cool” Roofs?
Cool roofs are designed to reduce energy consumption and reduce what is commonly called the urban heat island effect. Cool roofs are categorized into three basis types: white, reflective coated, or green (vegetated) roofs. White roofs are the most common with TPO (thermoplastic polyolefin) and PVC (polyvinyl chloride) being the typical choices. Though PVC and TPO roofs have the same wear and cost factors, PVC materials have some negative characteristics, such as high toxicity and un-recyclability, so for ease of comparing black to white we will only consider EPDM vs. TPO in our comparison discussions.

Comparing Options
To start with TPO roof membranes are recognized to have longer lives lasting on average 25 years compared to EPDM lasting 20 years. This is in some part due to TPO’s resistance to UV and thermal expansion damage. Some TPO products developed bad reputations in the past due to their inability to handle severe cold which in some cases caused the membrane to shatter. These problems are reported to have been eliminated with today’s TPO roofing materials.

Secondly, the initial cost favors EPDM roofs.  However, when life cycle and energy cost issues are considered the black and white roofs become competitive. Installation methods differ in that EPDM seams are taped or adhesively sealed while TPO seams are welded by a thermal process.

There are strong forces pushing the general acceptance of white roofs in the future.  States such as California have passed laws in 2005 requiring the use of reflective roofing materials as well as individual cities such as Chicago establishing building codes to favor its use. There is a body of evidence developing showing the heat island effect of black surfaces, which include not just roofs but also parking lots, paved roads, and building facades, can have an impact on local weather characteristics.

The nation’s largest green building advocates are influencing architects and building owners by favorably rating buildings with cool roofs. Under the joint program of the US Environmental Protection Agency (EPA) and Department of Energy (DOE) for a roofing product to receive an Energy Star label under its Roof Product Program it must have a solar reflectivity of at least 0.65 and weathered reflectance of at least 0.50 in accordance with EPA testing procedures.

Going Green
The Cool Roof Rating Council (CRRC) has created a rating system for measuring and reporting the solar reflectance and thermal emittance of 850 roofing products and provides this to energy service providers, building code bodies, architects and specifiers, property owners, and community planners. The Green Building Initiative has instituted its Green Globe system in the US and Canada to develop benchmark criteria for a building’s likely energy consumption as a result of roofing material’s solar reflectance and thermal emittance.

Winter Penalty?
So with all of this horse power pushing for cool roofs, it seems like an easy black or white decision for the condo board facing a roof replacement project. Maybe not. For northern condos the problem is a little complicated. CRRC admits to a “winter penalty” when cool roofs are installed in northern climates. DOE building modeling data reveal that in the north heating is a much more significant factor in energy use than cooling. In fact, heating accounts for 29% of energy used compared to only 6% for cooling.

It turns out that insulation is a more important element for energy efficiency than cool roofs here in New England.  It has to do with the amount of Heating Degree Days (HDD) and Cooling Degree Days (CDD). As an example, Boston has 5,841 HDD and 646 CDD as compared to Albuquerque’s 4,361 HDD and 1,211 CDD.  Therefore using DOE’s cool roof calculator, Boston’s high number of HDD’s and positive winter heat gain results in lower energy usage and fewer carbon emissions with an EPDM roof. So talk with your roof consultant and remain cool.